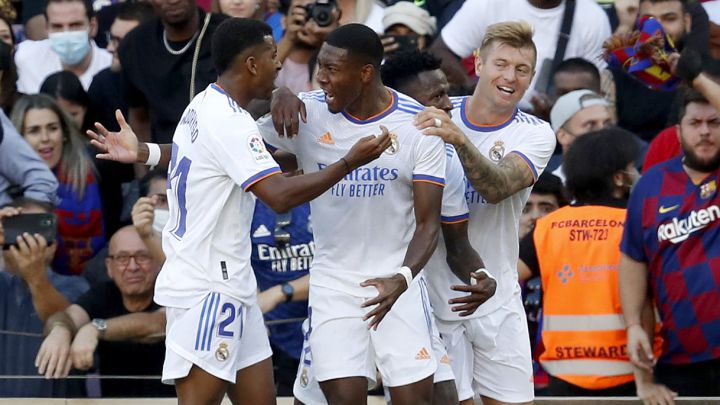 Real Madrid came away from Camp Nou with a 2-1 win over Barcelona in Sunday afternoon’s El Clasico, moving Los Blancos back to the top of the Laliga point table.

Ronald Koeman’s side started the game well, showing great intensity to overwhelm their visitors’ usual conductors in midfield, and should’ve found themselves one up after 25 minutes when an unmarked Sergio Dest criminally blazed over the bar from close range.

The USMNT international right-back was made to rue his mistake shortly after, as Real Madrid broke the deadlock with a deadly counterattack in the 32nd minute. David Alaba started the move by picking Memphis Depay’s pocket, before collecting Rodrygo’s pass and emphatically finishing past Marc-Andre ter Stegen.

Both sides proved well-matched after the break, with both seeing periods of control and squandered opportunities. In the end, it was another counterattack that sealed the result in the 94th minute.

Following a wave of Barcelona pressure, Los Blancos broke forward with Marco Asensio seeing a shot saved brilliantly by Barca Goalkeeper Ter Stegen. The subsequent rebound was slotted into an empty net by Lucas Vazquez to make it a 2-0 lead.

The drama wasn’t over, however. 3 minutes later, the Barca notched a goal of their own. Sergino Dest’s cross from the right was met clinically by Kun Aguero, who tapped in for his first goal in Baca jersey. It proved too little too late for Ronald Koeman’s men, however, as the referee blew for full-time immediately after.