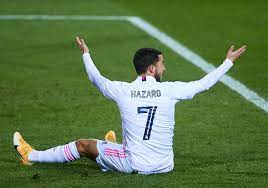 The former Chelsea forward has endured a difficult season with a hamstring injury since moving from England to the Spanish capital, played just 43 appearances for Real Madrid in the past two seasons.

Eden Hazard has been linked with a surprising return to Chelsea during his time at Real Madrid but has confirmed that he eventually wants to become a “leader” at the Bernabeu.

According to the Marca, report says Real Madrid are willing to put Eden Hazard in the transfer market window with the intention of making money, although Carlo Ancelotti is willing to work with the Belgian.

The report also says Carlo Ancelotti is confident he can get the best out of the injured man, but Real Madrid will be open for sale at a fair price.

Eden Hazard has scored 5 goals for Real Madrid and sought one advantage in four of Belgium’s Euro 2020 matches.