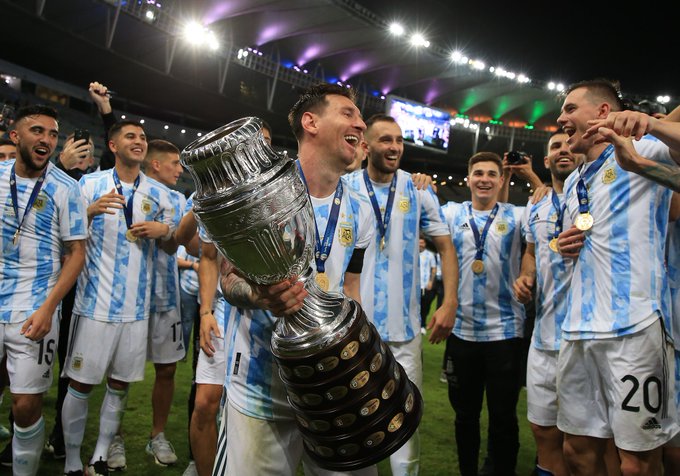 The last time when Argentina won the title Copa America 1993. The title that the Argentines won to Mexico was nothing but a victory. After so many attempts, after many things, Leo Messi’s Argentina finally won another Copa America 2021, ending a 28-year wait.

However, despite the smiles on the faces of the sky-blue supporters who won to Brazil in Maracana stadium, there is still a regret. Despite winning the Copa America title, the picture that their favorite Football god Diego Maradona did not go to see!

Diego Maradona left the football world crying on November 25 last year after suffering a heart attack (cardiac arrest). He was 60 years old then. Sitting on the field, he could not see the success of Argentina and Lionel Messi, Angel Di Maria, which was his most desired in his lifetime.

Maradona was longing for a title in Argentina. How much desire. No matter how much advice, no matter how much he inspired the team. But Leo Messi repeatedly reached the Copa final in his lifetime but could not give him a taste of the title. Leo Messi finally won the title after Maradona died.

And that’s why Albiceleste captain Lionel Messi has dedicated himself to the legendary Diego Maradona after winning the Copa America 2021. On social media, Instagram, he announced his dedication to Argentian Legend Diego Maradona.

“The Super Clasico win against Brazil in Maracana was a great tournament,” he said. We know there is still room for improvement. But the truth is everyone has played with their heart. And there is nothing more proud than being the captain of this team.

Messi also added: “I am the success of the family who has always supported me. My friends, who love me so much. All the people who support us, especially the 45 million Argentines who are now having a bad time because of the Covid-19 virus. This is for all of you. And of course, I’m dedicating this title to Diego. He is definitely supporting us wherever he is. ”

Thank God, the Argentine captain Leo Messi said, ‘Thanks to the creator for everything he has given me. And thank you for sending me to the world as an Argentine. ‘