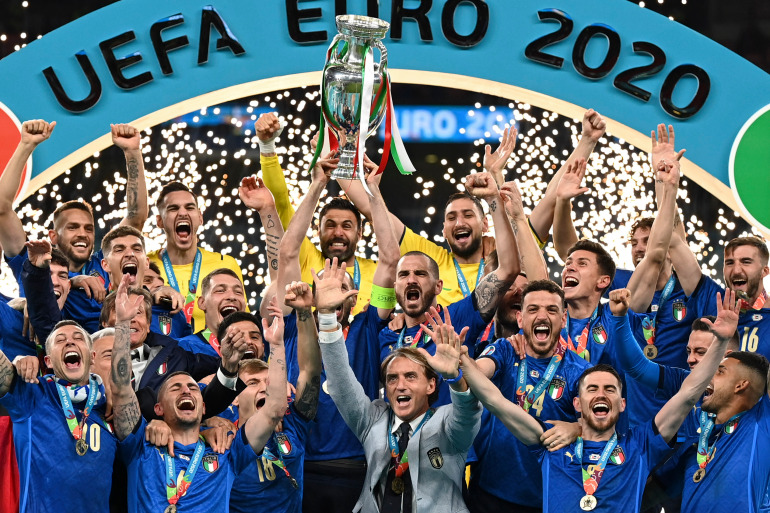 Italy beat England 2-3 in a penalty shoot-out at Wembley Stadium in London to win the Euro 2020 Championship for the 2nd time. the first time, Italy won the Euro Cup in 1986.

The match was a 1-1 draw at the fixed 90 minute time. Luke Shaw of England scored in the 2nd minute and Leonardo Bonucci of Italy scored equal goals in the 67 minutes. Italy missed the 2nd and fifth shots in the tiebreaker and the host England missed the last three shots. Italy holds the record of being unbeaten in 34 consecutive matches.

Berardi scored for Italy in the tiebreaker, Harry Kane of England scored, but Pickford blocked Bellotti’s shot, but Donnaruma could not block England’s Harry Maguire’s shot. As a result, the scoreline is 1-2. Bonucci of Italy then scored but was blocked at the shot post by Rashford of England. The score is again tied at 2-2.

This time Bernardeschi of Italy scored the goal. But Donnaruma saved England’s Sancho shot. The scoreline is 3-2.

There was renewed England hope when Pickford saved penalty expert Jorginho’s attempt, only for Saka to see his strike stopped to spark wild Italian celebrations.

There was renewed hope when Pickford saved penalty expert Jorginho’s attempt, only for younstar Saka to see his strike stopped to spark wild Italian celebrations.

The Azzurri won to Spain in a tiebreaker in the semi-finals on their way to the Euro 2020 final. The English won to Denmark.