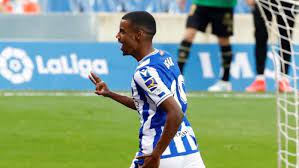 Barcelona are considering a move for the summer of Real Sociedad striker Alexander Isak.

According to Marca, Barcelona will emphasize the striker’s position in the summer, as it has been important for some time, and it has emerged that Isak is in the club’s ranks

Erling Haaland is regarded as a forward-looking one, although financial constraints could make the contract strike impossible, and Isak could be a very effective deal.

Los Cules’ technical department has been following Isak’s progress since arriving in Spain, previously trying to sign him before Martin Braithwaite’s arrival at the Camp Nou.

Isak has 14 goals for LaLiga this season and has been a key figure in Real Sociedad’s best season, and at just 21 years old he will be better and better